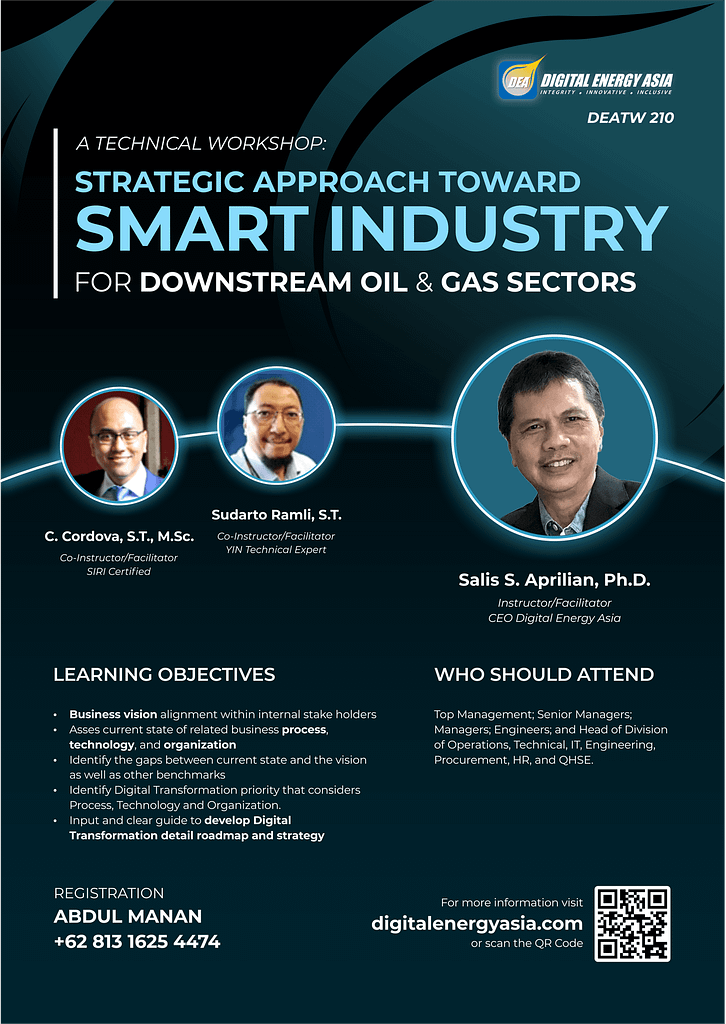 In the current VUCA (Volatile, Uncertain, Complex, Ambiguous) world’s situation, the industry is forced to improve its business and operation agility to reach operational excellence. Enhancement of business processes, technology implementation, and organization development that tailored to the company’s vision and challenges are keys for such improvement. A strategy that comprehensively considers these keys is required and shall be agreed by all stakeholders within the company.

The fourth industrial revolution, Industry 4.0, has brought possibilities of advance digital technologies to be utilized and accelerate the improvement, so called Digital Transformation (DX).

Selecting suitable technologies shall be aligned with the strategy. Due to possible limited resource owned by the company priority must be made, targeting the most impactful opportunities to the business and operation.

Smart Industry Readiness Index (SIRI) is an assessment tools to evaluate industry—that has production activity, manufacturing—readiness and maturity before it starts its Digital Transformation journey. It supports initial strategy development by comprehensively consider company’s process, technology, and organization, and pinpoint several focus areas as improvement priority. The result will be a starting point to build the journey’s roadmap for stakeholders that will be used as guidance to start, develop, and sustain the company’s Digital Transformation.

Supported by certified SIRI assessor and global technology consultant, we would like to propose to PT Badak LNG to conduct SIRI Digital Transformation Assessment that will bring following benefits:

The report will be Official SIRI Report that will be delivered with the priority and include the assessor’s insight about potential improvement. The information can be used to begin functional detail study to develop strategic roadmap prior to the implementation project.

He obtained BS and MS degrees in Petroleum Engineering, Bandung Institute of Technology (ITB), in 1987 and 1993 and Ph.D. degree in Petroleum Engineering from Texas A&M University in 1998. His vision is to develop the young professionals in oil, gas, and energy industries to sustain the business more sensible to the environment by using advanced digital technology.

Graduated from Engineering Physics Department of Bandung Institute of Technology in 2008 with specialization in Unmanned Aerial Vehicle, Cordova begin his career in one of Indonesia’s Private Oil & Gas Company as instrument and automation engineer where he gained his experience in facility development, operation, and maintenance.

Interested in Sustainable Energy Technology, he received his Master of Science in 2013 from TU Eindhoven in The Netherlands, and KTH Stockholm in Sweden with specialization in solar thermal energy conversion. In the same year, Cordova continue his career by joining YOKOGAWA Europe in The Netherlands as System Engineer, as well as Technology Specialist and involved in several projects and technology implementations for various industries, such as oil and gas, chemical, petrochemical, metal, and utility. In addition, he was involved in new product development for safety improvement based on optical technology.

With motivation to contribute to his country, in 2019 Cordova decided to bring his international experience back to Indonesia and continue his activity with YOKOGAWA Indonesia as System Specialist and lately as Digital Transformation consultant. He is certified SIRI consultant with experience to support process and manufacturing industries to begin their Digital Transformation journey by prioritizing the most impactful area considering the company’s process, technology, and its organization. Currently he is part of YOKOGAWA global digital consulting team.

Graduated from Engineering Physics Department of Bandung Institute of Technology in 1988, Sudarto Ramli begin his career as Instrumentation Engineer and join YOKOGAWA team as System Project Engineer 6 years after. He dedicated his lifetime career to develop YOKOGAWA Indonesia engineering team and accomplish several key achievements such as establishment of engineering workflow based on ISO:9001:2000 and quality management system based on ISO:9001:2008. His last position as Technical Director until 2020, and currently serves as YOKOGAWA Indonesia Technology Advisor responsible in assisting Board of Directors in advancing Digital Transformation development and implementation in the industry.

Beside his professional career, Sudarto has been appointed as member of Advisory Board by Industrial Technology Faculty of Bandung Institute of Technology (ITB), to advise Instrumentation & Control curriculum improvement and development to achieve accreditation by Accreditation Board for Engineering and Technology (ABET).

The DEATW 210 Technical Workshop is designed to provide an introduction and implementation of applied technology, process, and organizational assessments in the downstream oil and gas industry sector with an international standard of the assessment called SIRI (Smart Industry Readiness Index).

In order to have efficient workshop the participants limited up to 20, and we strongly recommends personnel with below function to participate:

Designation may vary, depends on organization.

What Will I Learn?

The latest schedule for the DEA Training Course & DEA Training Workshop 2022 has arrived. Click this button to view it.